Ready to roll: E-scooters spring back to Edmonton, new company looking to launch 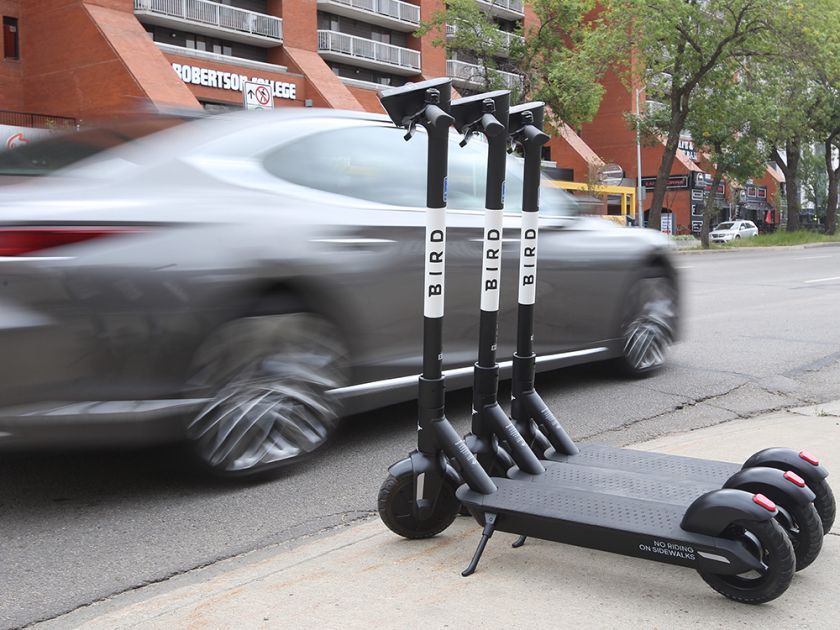 Scooters available for rent along 109 Street north of Jasper Avenue in Edmonton on Friday, Aug. 16, 2019.

E-scooters will be rolling back into Edmonton this spring.

Both Bird and Lime confirmed Saturday the alternate mode of transportation will be on city streets once the snow clears permanently. The two companies are currently working out how many will be in their fleet this season but at the start of last year Bird offered 400 while Lime had 200.

Alex Petre, general manager of Bird Canada, said she’s excited to have another season in Edmonton

“We think there’s a lot more demand out there,” she said. “We hope citizens of Edmonton are very excited to ride the scooters again.”

Edmontonians will have one more option to get around the city following the expansion of Toronto-based Roll Scooters to Alberta.

Arda Erturk, chief communications officer with Roll, said the company plans to launch in Calgary first with a fleet of 500 and then in Edmonton sometime in the summer with a fleet between 500 to 1,000. The company still needs final approval from both cities.

With Bird and Lime already established in Edmonton, Erturk said Roll won’t be making the same mistakes those companies made when they first started.

“In Montreal, the municipality actually banned the scooters,” he said. “Bird and Lime launched there and the city didn’t like how they operated. We want to change that. We want to work with municipalities, not just asking for permits.”

He added safety is No. 1 for the company, mentioning Roll has a speed limiter for first-time riders and will offer free helmets to patrons.

“I think people who like to ride Bird scooters will stay loyal,” she said. “We also have a good understanding from last year where people actually want to ride them. We know how to provide that service and how to make it reliable.”

She added Bird will also be offering additional services but didn’t go into details.

Alex Youn, communications and public affairs manager with Lime, was also not worried about the new rival, adding his company offers a top-quality product.

“I think that if someone were to pay a little bit more for a premium product that they feel safer on that’s something we would encourage folks to do,” he said.

Lime will be offering a weekly pass at $4.99 that unlocks scooters for seven days and a group rate which allows for up to five scooters to be unlocked.

All e-scooter companies charge a dollar to unlock and then an additional charge per minute. At the moment, Bird and Roll are charging about 0.35 cents per minute.

No riding on sidewalks

E-scooters can ride in bike lanes, shared pathways and on roads where the speed limit is 50 km/h or less. Edmontonians aren’t allowed to ride on sidewalks or unmaintained park trails. Parking is allowed on sidewalks, in parks and parking lanes except for E-Park zones as long as it doesn’t block doors or anyone’s way.

Last season several scooters were damaged after being lit on fire. Petre called it isolated vandalism but added the company plans to work closely with Edmonton city police to ensure it doesn’t happen again.

Youn added any time someone damages the scooters, it only takes away from someone’s experience. He said the company had a great first season with high ridership among commuters.