Snapchat users have an Edmonton-based virtual reality developer to thank for one of the spooky lenses they can use to transform themselves this Halloween.

During an international conference at Snapchat’s Santa Monica headquarters last week, the social media giant chose KO Group’s VR division, KOVR, as one of six official lens creators to celebrate Halloween out of hundreds of creators across the globe.

The six official lens creators were featured on the main carousel of the app for the first time as it is usually reserved for paid brands or Snapchat’s own lenses.

Aaron Clifford, a senior producer at KOVR, said it took about two and a half weeks to develop the lens using the tools Snapchat provided. He said he challenged himself to use both the front-facing camera and the rear camera of a phone.

“It was a real technical challenge for that one,” he said. “It was essentially creating two lenses in one because I was combining all of those effects.”

The lens, called Soul Selector, can either alter someone’s features to look more angelic or demonic depending on which way their head turns. Clifford said they wanted to feature both something light and dark to give people more choices. 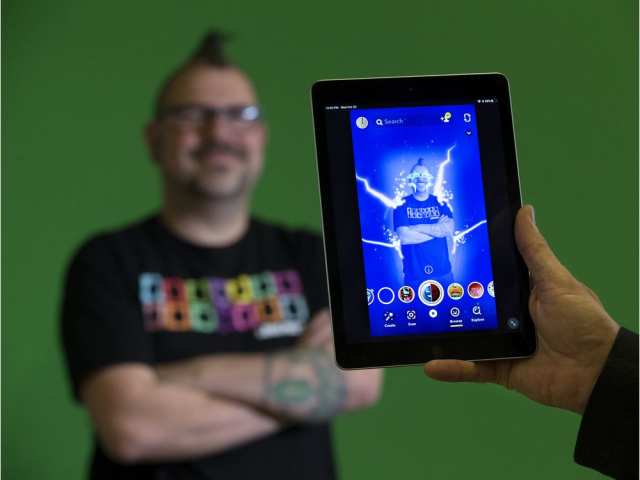 A lens is a kind of filter that changes a person’s appearance such as turning someone into a cat or putting sunglasses on.

Clifford said it has been amazing to work with Snapchat.

“It has only been out now for a couple of days now and already the lens has had, last time I checked, two million views,” he said. “It’s one of the most popular lenses in a very short amount of time. It really showed (Snapchat’s) commitment to Snapchat being an artistic platform and helping us grow as an official lens creator.”

Having first established three years ago, Clifford said Snapchat’s exposure has opened a lot of doors for KOVR and the company is already working with brands. He called it a surreal experience.

By the end of the third quarter for this year, Snapchat had 210 million users across the world.