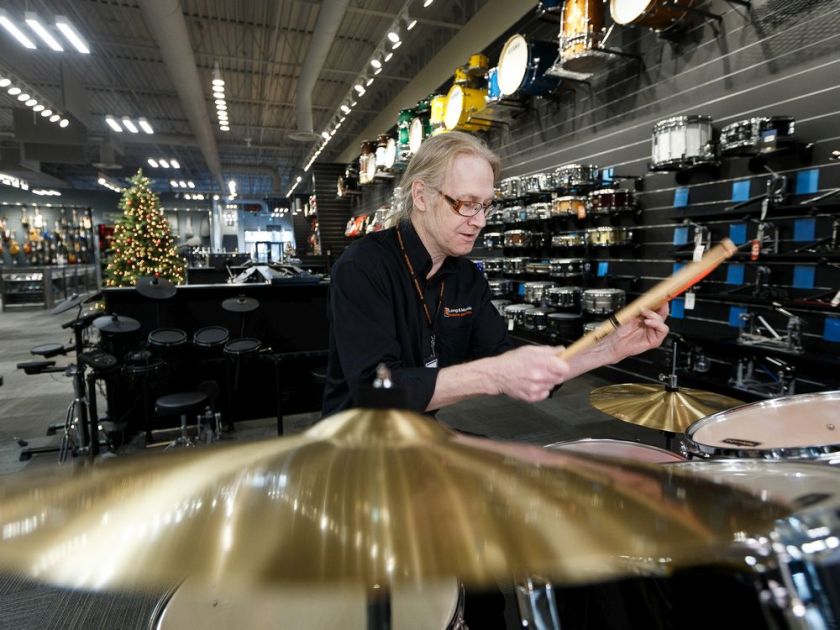 The iconic Axe Music store in northeast Edmonton closed down last week, but staff from the store didn’t have to move far.

All the old Axe Music employees relocated to a new Long & McQuade, at 118 Avenue and 66 Street — a spot in the Highlands neighbourhood less than a kilometre away from the now-closed Axe Music.

The move came as a result of the 2018 sale of Axe Music to Long & McQuade after almost four decades in business.

Rick Shermack, also known as the voice of Rockin’ Rick from Axe Music radio ads, was among the employees to make the switch. He’s now the store manager of Long & McQuade Highlands.

He hopes the new store is able to successfully integrate into its new community; he’s already seen kids from the nearby Eastglen High School stop by and try out some of the instruments.

He also wants to continue on an old Axe Music tradition of donating guitars to be signed by high-profile artists and sold in charity auctions.

“We did hundreds of those and had millions of dollars of money raised,” Shermack said. “It became a part of our profile.”

The new building is the site of an old Safeway grocery store that had been vacant before Long & McQuade started renovations. The exterior was modelled to reflect the design of the Highland Edmonton Public Library, located across the street.

The space is about 30 per cent larger than the Axe building, according to Shermack. It includes a music lesson centre, and a section for metal, plus some rarer instruments like bagpipes and didgeridoos.

Having spent 25 years working there himself, Shermack has plenty of memories of the old Axe Music store. But perhaps nothing tops the most high-profile musician ever to stop by the store.

“We had Prince rehearse in our store. He and his staff treated our staff very well. There was a lot of secrecy around it,” Shermack laughed. “We had a lot of clinics and musicians come through, especially related to us being across from the Northland Coliseum.”

Another part of what made Axe Music notable was the monolithic neon guitar sign that stood outside the entrance. New ownership considered moving the guitar, but decided against it due to cost as well as branding problems.