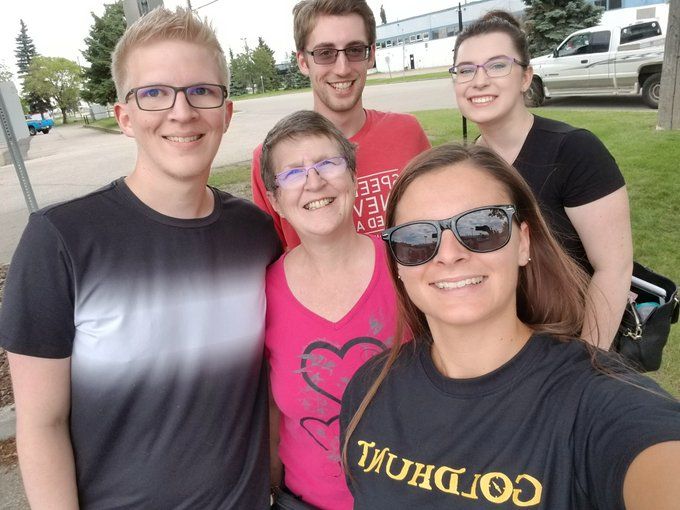 Lorraine Yaremchuk and her team, the SWAT Team, are competing in the Edmonton GoldHunt for the second time this year. The prize is a whopping $100,000 worth fo silver and gold.

The treasure weighs 200 pounds. This really is a gold hunt.

The Edmonton-born business creating real-life treasure hunts launched its second local hunt Saturday, selling maps for roughly $50 a pop to give local hunters a chance to rake in the gold.

It’s a treasure for the businessmen, too. GoldHunt’s first hunt, which saw treasure chests hidden in Edmonton, Calgary and Vancouver, saw 8,000 people participate.

This time, the price of the maps nearly doubled. GoldHunt started a second round of the treasure hunts Saturday in Vancouver, Calgary and Edmonton. They’ve also planned hunts in Winnipeg, Hamilton and Halifax on Aug. 31.

A group for four friends in Edmonton had the idea this spring, found investors and launched the first hunt within 30 days, said Chris Cromwell, one of the founders.

The friends were talking about Forrest Fenn, an American art collector who said he hid a $3-million treasure somewhere in the American Rocky Mountains. Fenn published clues in his memoir nearly a decade ago and the hunt proved so popular, several people have died trying to find it.

The new business GoldHunt is an effort to let people seek a real treasure without risking their lives. It now employees a team of 12.

“It’s incredible to see reactions from people of all walks of life,” said Cromwell, who said its been popular with families and groups of friends. The Duff family from Sherwood Park won the first treasure.

GoldHunt released a statement from Bryon Duff and Jody Duff after the last hunt. It appears they’ve also spoken to at least one media outlet.

Cromwell couldn’t say how many maps were sold this time. But the hashtag #goldhunt was trending No. 1 in Edmonton Saturday, and #SelfieForABonusClue was trending No. 5 in Canada. Participants posted a photo of themselves on social media to get an extra clue.

This isn’t the first rodeo for Lorraine Yaremchuk’s team, the SWAT Team, who competed in the previous Edmonton Gold Hunt earlier this spring. Yaremchuk herself has also completed around 50 escape rooms, and loves the challenge of working in a team to solve a puzzle.

“It’s like an escape room, but bigger,” said Yaremchuck on Saturday afternoon. She, her husband, their children and friends of her daughter were crowded around the kitchen table, “four or five computers open,” taking a breather to research before they set back out again to hunt for treasure.

Finding the gold is definitely not as straight forward as following a regular map — instead, the first “map” teams got was a series of challenging riddles they need to solve to get to the next step.

“They’re much harder than last time,” said Yaremchuk, “but we hope, since we’ve lived here many years, that’ll help us.”

Teams who think they’ve cracked the riddle  — which could ask about anything from local history to pop culture — visit the location it leads them to and search for the answer to the clue there. Once they’ve got it, they send it in via email and GoldHunt confirms whether they got it right.

If you get all 16 on the first map correct, you make it to the next round of competition, and one step closer to the pot of gold.

On Saturday afternoon, GoldHunt was experiencing some difficulties with the auto-reply function that lets teams know they’ve received their answer. With six figures on the line, technology team lead Paul Klaszus says their focus is on getting it back up and running — and fast.