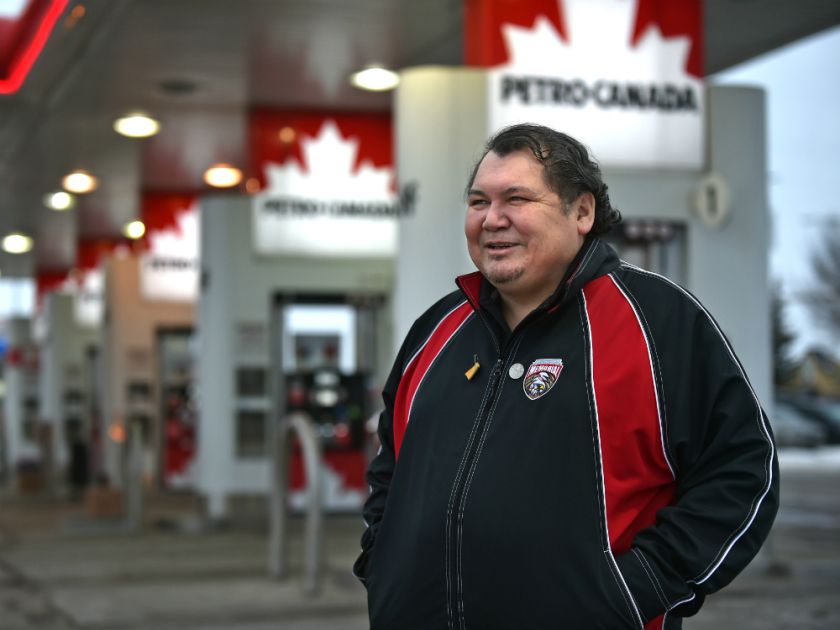 Papaschase First Nation Chief Calvin Bruneau outside the Petro Canada gas station on Calgary Trail, which the company sold to the First Nation in an act of reconciliation, in Edmonton on Friday, Jan. 3, 2020.

Owning its own gas station is a big step in rebuilding the sovereignty of the Papaschase First Nation, and its the first within Edmonton city limits, says Chief Calvin Bruneau.

“A true sovereign nation is a self-sufficient nation. That’s what I’m aiming for here. We want to prove to people that we can look after ourselves,” said Bruneau Friday.

“I love it here,” said cashier Melissa Johnson, one of 20 Indigenous employees and a member of the First Nation.

“All the customers are super excited — they want to know more information,” she said. Sharing the story of who they are is an important part of the business.

“I want people to know this is our gas station,” said Bruneau.

The Papaschase, a 250-member signatory of Treaty 6, had a 100-square-kilometre reserve from 1880 to 1887 covering most of south Edmonton.

Their descendants filed a lawsuit in 2001, saying the Indian Agents coerced band members to leave the reserve. The lawsuit was thrown out in 2008 when the Supreme Court ruled too much time had passed.

Now, Papaschase counts at least 900 members, but thousands of descendants across Canada, said Bruneau. It aims to be recognized as a band by Ottawa but, for now, the goal is to acquire more land and establish an urban reserve, said Bruneau.

“If this land wasn’t taken from us, this would be our reserve. And all this would be built on it, and we’d be a well-off First Nation. So we need to take it back acre by acre,” said Bruneau.

“We want to have our own store, products, and do what we want to do. That way people see that it is possible — you can have a fully owned and operated First Nation gas station in Edmonton,” said Bruneau.

The purchase of the store, including getting a private investor on board, has been in the works since 2018. It was partly inspired by a First Nation-run gas bar in Saskatoon, said Bruneau.

“It was buzzing with activity. Yes it was a convenience store, but I noticed it was different. There was artwork on the walls, display cases filled with all kinds of stuff like moccasins. I said, ‘We gotta have something like this someday,” he said.

Under the fuel price sign outside is the Papaschase First Nation logo, but another sign is in the works that will soon display the Cree word for ‘future,’ said Bruneau: ôte nîkân.

“I want people to know we’re here to stay.”

The store was purchased from Petro-Canada parent company Suncor in what the chief calls an “act of reconciliation” meant to bring prosperity to the First Nation. Papaschase set up shop in December and plans to have a grand opening celebration in late January. Suncor did not respond to a request for comment Friday.