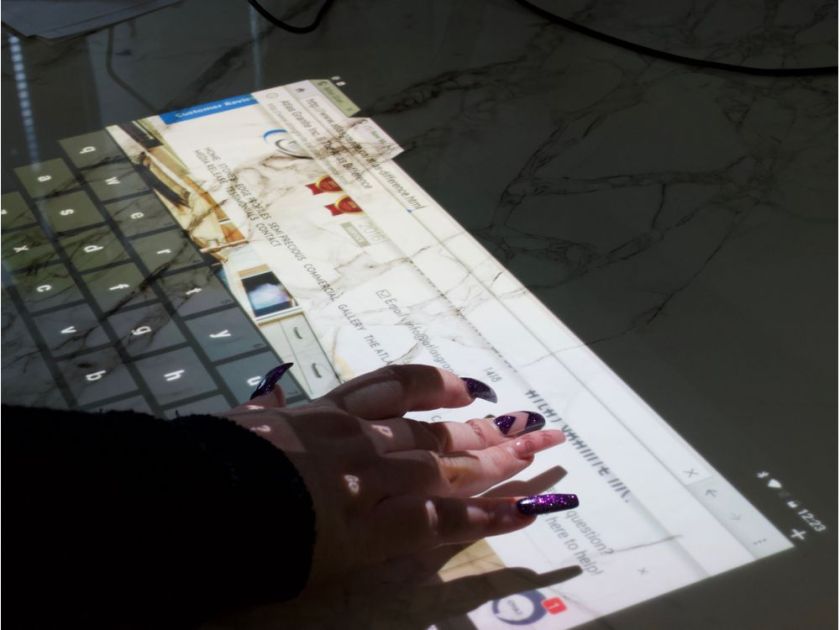 Edmonton’s Atlas Granite has developed a touch screen countertop, which can display anything from Netflix to emails with a simple swipe. The company was able to bring a fully functioning display to the NAHB International Builders’ show in Las Vegas in January where it took home the coveted best overall kitchen and bath product award.

An Edmonton-based company is giving kitchen connoisseurs one more reason to keep their countertops clean and clear.

Atlas Granite has developed a touch screen countertop, which can display anything from Netflix to emails with a simple swipe.

The countertop has been in development for about a year but hasn’t hit the market just yet. However, the company was able to bring a fully functioning display to the NAHB International Builders’ show in Las Vegas in January, where it took home the coveted best overall kitchen and bath product award.

“It’s still sinking in,” he said. “We could never imagine that (we could win). This is huge. This is going to open up so many doors for us now. I’m getting calls from all over the world.”

Nayar said he’s always had a passion for technology but chose to pursue kitchen countertops as a means to pay the bills. It wasn’t until he was overseas with his wife that they saw a projector displaying an image on a countertop. The projector could link to someone’s phone and display whatever the phone had on it.

Nayar said his wife loved the idea but wished some kind of touch technology could be integrated.

“It just got me thinking,” he said. “I found partners overseas who would develop that for us. We researched for months and we could only find one company that had the capability to do that. A year later, we had this prototype.”

Nayar hopes to launch the countertop within the next few months at a starting price of around $3,000.

The technology works by first using three or four fingers to swipe the area after turning it on. A screen appears and provides the same features as an iPad. Nayar boasted the screen is far tougher than any tablet.

“You are playing around with light,” he said. “You still have your counter, there’s no film on top. There’s a projection that’s touch enable.”

He added he believes there are other applications for the touch screen other than countertops, including the health industry. But at the moment he’s going to continue to focus on households.

Atlas Granite started in Edmonton about nine years ago at a 2,000 square foot location. The company grew over the years, taking on big projects such as at Rogers Place and other projects in the Ice District.

It now has a staff of about 30 people, has even grown into other provinces including Saskatchewan and British Columbia.

Despite the growth, Nayar said he still calls Edmonton home.