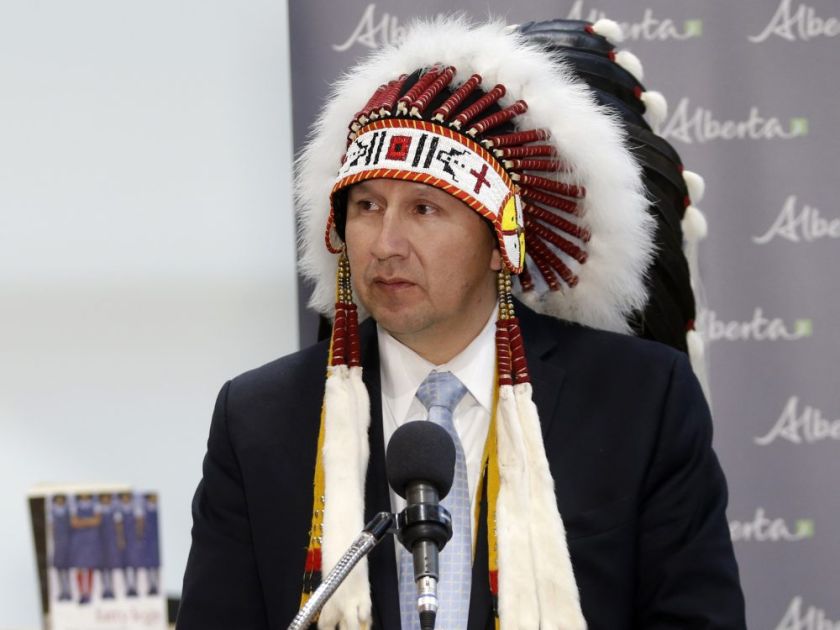 Iron Coalition, co-led by Chief Tony Alexis of the Alexis Nakota Sioux Nation, is urging all First Nations and Métis communities in Alberta to sign an exclusivity agreement to join its bid to secure ownership of a pipeline.

I’m going to tell you something today that will turn upside-down your understanding of Indigenous people in Canada. They are no longer the tragic victims of Canada’s Confederation. Instead, they are our new resource rulers, the single most powerful player in the oil and gas and mining sectors.

Indigenous people have de facto control over which major pipelines, mines and other natural resources proposals succeed or fail. They are business partners in natural resource projects, getting a share of the profits and making sure their lands are protected environmentally.

“They are determining the outcome of resource projects in every industry in every region of the country,” said Ontario lawyer Bill Gallagher, a long-time resource sector strategist and native rights expert.

The only real question is how many more First Nations will be able to enrich themselves in a shaky sector.

Other oil and gas jurisdictions are booming. Norway is drilling more oil wells than ever. The Saudi-owned oil giant Aramco is the world’s most profitable company. And Donald Trump’s White House just bragged on Twitter: “Our great American energy industry has made the United States the #1 producer of oil and natural gas on Earth!”

But in Canada the industry is in a deep funk, partly because it took far too long for Conservative governments and many major oil executives to recognize the legal imperative to partner with Indigenous groups. Now there’s a new threat to the prosperity of Indigenous people, the rising power and influence of woke environmentalists, or “eco-colonialists” as native business leader Calvin Helin calls them.

Big city greens can’t or won’t thwart the rapid and massive U.S., Norwegian and dictator oil producers, but they are demonizing and sidelining the Canadian sector at every turn, and consequently blocking large parts of the Indigenous population from achieving prosperity.

While this new tension is now taking off, the old tension between resource companies and First Nations is being resolved as companies move away from the mistakes of the past.

“We’re consistently stupid in treating First Nations as an afterthought, and trying to do side deals with them to appease them, when in fact they hold all the cards,” said Gallagher, who has written two books on the subject, 2012’s Resource Rulers and his new book, Resource Reckoning: A Strategist’s Guide from A to Z.

First Nations are on a decades-long winning streak, now at 287 legal victories and counting, where Canadian courts have consistently recognized and expanded their constitutional powers over their land and resources, giving them rights that other Canadians simply do not have, Gallagher said.

During the Stephen Harper era, both the federal government and all kinds of companies failed to recognize this new legal reality, especially companies that deferred to “clueless corner office lawyers,” as Gallagher puts it, those intent on grinding First Nations with every legal tool.

First Nations can now expect to get commitments for training and jobs on resource projects. They may well also get an ownership stake of 10 per cent to 15 per cent, as well as guarantees on environmental issues.

“If you’re an industry CEO the safest bet for a return to shareholders for a resource project is to have a partnership with First Nations and have them be a co-applicant and a co-sponsor of the project,” Gallagher said.

As for Justin Trudeau, the prime minister buys too much into the out-of-date notion that Indigenous people are victims. “He goes overboard on the sympathy bit …” Gallagher said.

“Natives aren’t looking for sympathy. They’ll laugh you out of the room if you’re coming at them with a sympathetic streak. They know they’re empowered. They know they have these land rights. And they’re looking to translate them into some sort of successful outcome or solution.”

As for those worried that First Nations will have unchecked power, it’s also the case that Indigenous groups can overplay their hands and lose out on developments crucial to their own future.

I’ll leave the last word to Gallagher on this crucial point.

“They, too, have to show restraint …,” he says of First Nations. “The window of opportunity to run a major project is so fleeting in this country. It closes before you realize it … All sorts of projects on the B.C. coast have closed … Those windows of opportunity were only there for between 18 months and two years and then, poof, those projects go up in smoke. So just because First Nations have racked up this one-of-a-kind winning streak doesn’t mean they can go cruising into a successful project.”