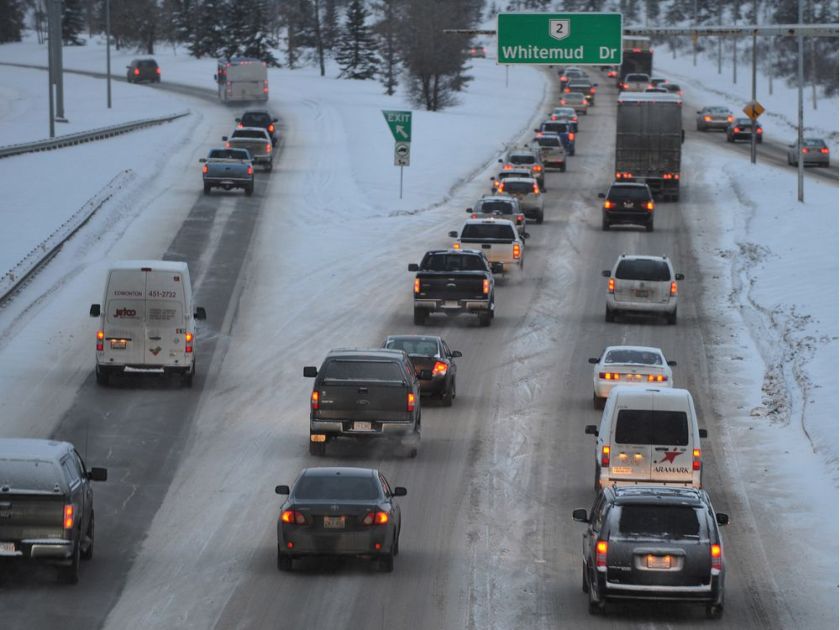 Traffic moves along Whitemud Drive near 53 Avenue in Edmonton on Dec. 2, 2013.

No doubt there are cities with bigger traffic woes than Edmonton, but does any other place do more to fuss and mess with its traffic than does Edmonton?

We can’t do anything about the snowfalls that sometimes streak down at night in hypnotic fashion, nor much about the ice that sometimes brings terror to our roads and alleys, nor about our freezing-and-thawing, pothole-promulgating thermometer shifts.

And what about our lightly-used bike lanes, with there is an endless array of unfamiliar and cryptic traffic signs? Good luck figuring out what they mean.

Then there are the LRT crossings that block traffic at major intersections for many minutes at a time. These crossings have made some parts of the city no-go zones during rush hour.

Of course, there’s also the old joke that there are just two seasons here: winter and road construction. You know it’s construction season by the 50 km/h zones that stretch on for kilometres on our main freeways without a worker or piece of machinery in sight.

And just how many more years is it going to take to fix the Groat Road Bridge?

Topping it all is our obsession with photo radar, which sees us with more enforcement than any other city in Canada — and it’s not even close.

Alberta has the most photo radar per capita in Canada, three times more than in British Columbia or Manitoba, which are tied for second place. And in a province mad for photo radar and its resulting revenues, $220 million a year in 2016-17, Edmonton raised the most money, $51 million, lapped up in 3.7 million hours of photo radar enforcement on our streets. Calgary came in a distant second with $38 million in revenues derived from 2.7 million hours of radar enforcement.

Here, at least, I was hoping that the provincial government might step in and save Edmonton drivers from city hall’s ongoing photo radar cash grab. But based on recent events I doubt we’ll get much reprieve.

My hope was founded in a bipartisan discomfort with heavy photo radar fines, which included our new Premier Jason Kenney, who said in 2016: “I’m very concerned that increasingly photo radar is being used not as a law enforcement tool but as a revenue generation tool. I think there’s growing evidence it’s becoming a bit of a cash cow for governments … It seems to me this is an abuse of the power of government.”

Then came then-NDP transportation minister Brian Mason, who said last February: “I think in some cases photo radar in the province of Alberta has been a cash cow. It’s my intention that we are going to humanely put the cash cow down.”

On Tuesday, however, the Kenney Conservatives failed to axe photo radar.

Instead, Transportation Minister Ric McIver announced that the government — which just raised its own take of photo radar revenues to 40 per cent from 27 per cent  — will take two years to study the situation, this after the NDP had studied the situation for several years and commissioned a 178-page independent expert report.

The report’s key finding? That our unprecedented embrace of photo radar has led to a small reduction in accidents, 1.4 per cent over an eight-year period, compared to jurisdictions that don’t have photo radar.

“Alberta is a leader in the use of ATE (automated traffic enforcement) in terms of the breadth of use across municipalities of all sizes, the variety of device types used, and the intensity of use in terms of devices per capita. However, despite this high level of use, collision rates in Alberta have decreased at similar levels to other jurisdictions.”

Despite this study, McIver says more study is needed.

Whatever is now found, I expect little will change. Why? Based on the government’s rhetoric and framing.

For one thing, McIver declined to label photo radar as a cash cow, as Mason and Kenney had done.

And one word that kept coming up was safety.

“We’re going to make sure the focus for photo radar is on safety,” McIver said.

It’s hard to argue against safety. Only a heartless ogre would do so.

But when safety is invoked as a key frame for any issue, that is cover for the strictest of regulations.

In the case of photo radar, that means we’ll get more of the same. Our roads will continue to be as safe as roads in cities that don’t have photo radar. Our municipalities and province will keep raking in fines.