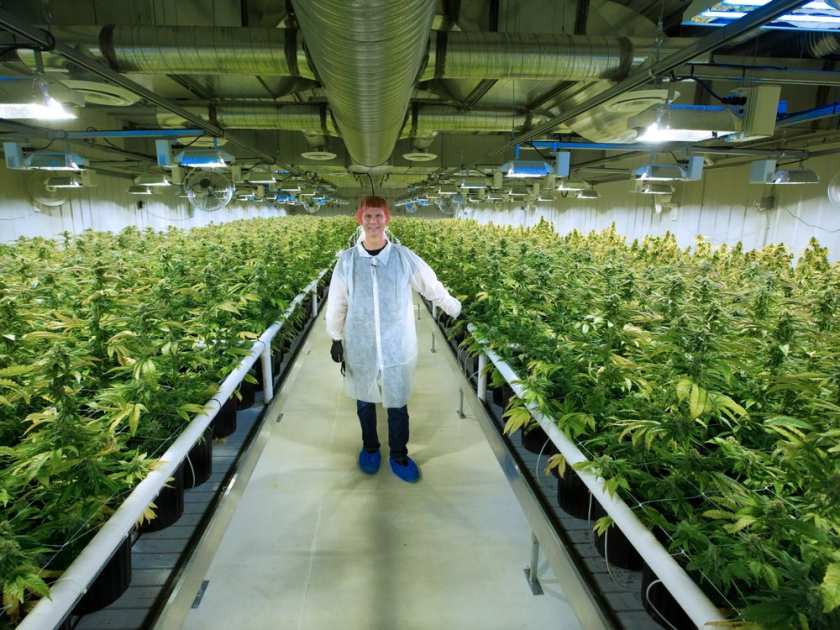 A medical marijuana company is leasing 12 hectares at the Edmonton International Airport to build what it calls the world’s biggest legal pot production plant.

Aurora Cannabis Inc. has started constructing the 75,000-square-metre Aurora Sky facility on land north of the passenger terminal in a move intended to cash in on the country’s looming recreational smoke business as well as the growing medical field.

“With an anticipated 3.8 million Canadians buying (recreational) cannabis, that’s an order of magnitude larger than it is today.”

The facility, big as nine football fields, will mainly be used to cultivate marijuana, including starter plants for home gardeners with a prescription, but will also handle processing, warehousing, packaging and distribution.

It’s being built in modules and should be finished by October, employing at least 200 people at full operation, Battley said.

Orders must be sent through the mail and can’t legally be sold in shops, so the plant won’t have a retail outlet.

One of the main reasons the company chose the Leduc County location is to be close to truck and air carriers which can handle its growing same-day service, now used by almost all Aurora customers in Edmonton and Calgary, Battley said.

Aurora has launched an app for ordering the drug and is taking an “e-commerce approach” to the business, he said.

“We’re trying to operate in the same way that the giants are, such as Amazon … It makes an awful lot of sense for us to have our facilities located at an international airport.”

But the Alberta-based firm might also move into the export market if countries such as Australia, Germany or possibly the United States ever act on talk of legalizing dope.

Leasing details and construction costs are being kept confidential for now, but Edmonton International Airport spokeswoman Heather Hamilton said the development will contribute to the 2,000 new jobs expected on its land next year.

At full capacity, the site will be able to produce more than 100,000 kilograms of cannabis annually, far more than Aurora needs now — it sold a record of more than 200 kilograms  in November.

The entire Canadian industry sells about 47,000 kilograms of cannabis a year.

But Battley, who said Aurora originally considered a project 25 per cent smaller, is looking toward a future that includes 10 per cent monthly increases in marijuana prescriptions.

“The consumer cannabis system will be in place sometime in 2018. It’s really important that we scale up our capacity to meet that demand,” he said.

“Once this is completed, we believe it will be the largest, most advanced and most automated plant in the world, and the only one by an international airport.”